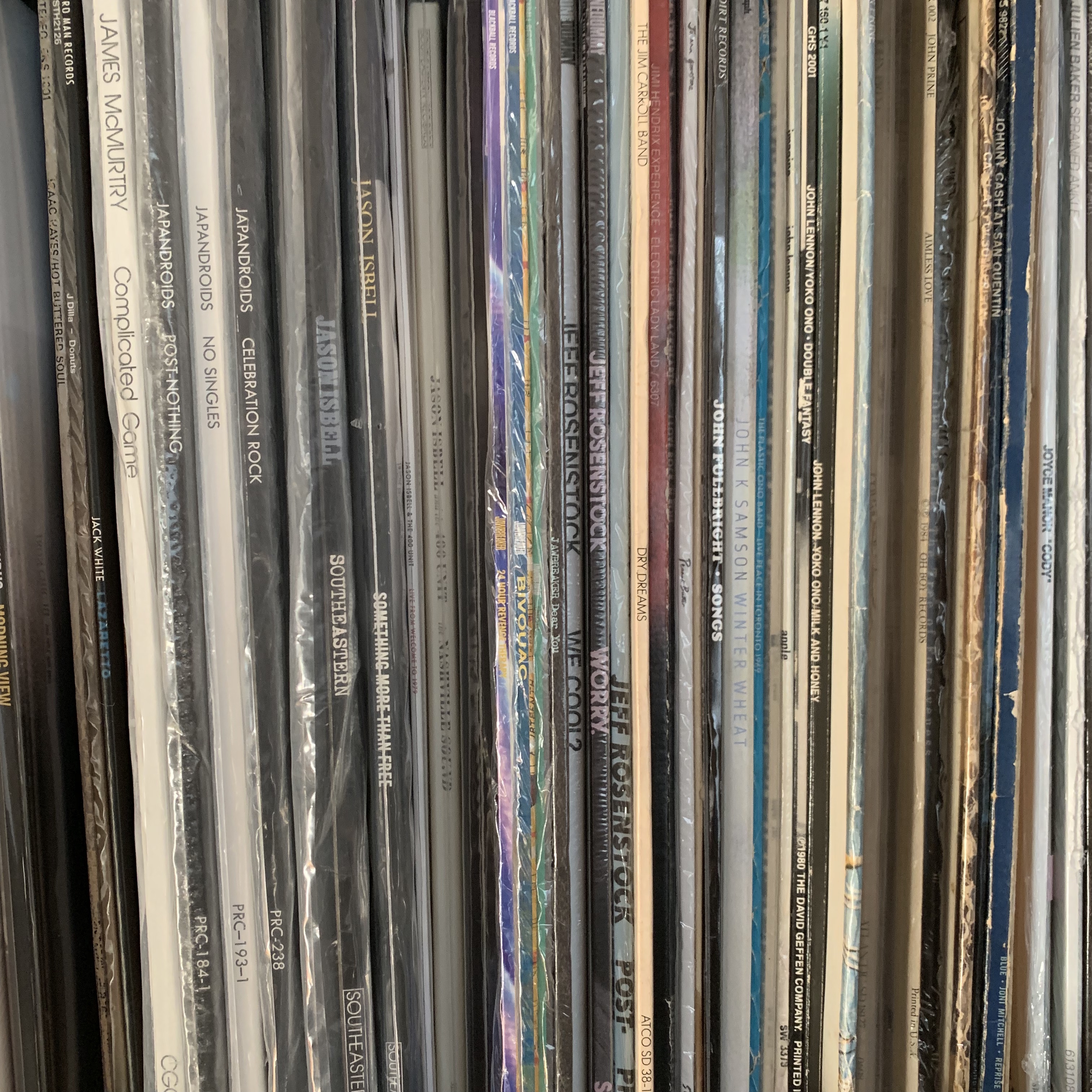 As usual, extremely hard to make a list of my favorites this year. There are plenty of great records from 2018 to check out beyond these ten! Spotify playlist of the top ten at the bottom of this article.

I’m still overwhelmed by Nearer My God after all of these months. It’s an album title that smacks with the air of supreme confidence and ambition, one that too many bands fail to live up to. Foxing somehow does. It’s one of those super-rare occasions where a band somehow hits their stride as artists and hits a creative peak. Songs like the opener “Grand Paradise” with its blippy churn and the horn swells of the single “Slapstick” really are just setting up for sonics that are weirder and more ambitious. “Lich Prince” sort of feels like a woozy 2011 Drake ballad before it opens up to a gasping, monolithic rock song. Have the lyrics “I feel like a houseplant” ever been used before? Have they ever given way to a cataclysmic world-burning guitar solo? Has that ever segued into falsetto harmonizations all in the course of a minute? Of course not. That’s what makes it so awesome.

The album’s title track is a soaring, chugging power ballad, perhaps the most traditional thing on the record. “Heartbeats” doesn’t sound like a rock band at all – soundscapes tempered with program drum hits and orchestral samples that sound super familiar but transformed into something that feels entirely fresh. Nearer My God packs so much detail per song it’s impossible to quantify the breadth of what an accomplishment it is. It’s brazen, daring and still somehow so organic. It somehow feels we’ll be talking about it further down the line than we do now.

I first heard about Lucy Dacus the way a lot of people hear about new bands: from the playlist of the 2016 VP-nominee, Senator Tim Kaine of Virginia. Seriously. He included her song “I Don’t Wanna Be Funny Anymore” on a streaming playlist. Turns out his daughter is friends with Dacus. Obligatory next-door neighborly plug it wasn’t: Dacus’s 2016 debut No Burden is seriously great. Historian is even better.

The Richmond based singer-songwriter builds on the confidence and songcraft of her debut by re-teaming with producer Collin Pastore, which was then mixed with John Congleton, who is known for his work with St. Vincent, among others. The result is a record that feels weightier and enveloping in sound opposed to the lo-fi sounds of No Burden. Dacus is 23, but the rich tone of her voice begets a singer whose doing it much longer. From the chugging opener “Night Shift,” a classic breakup song – “You got a 9 to 5, so I’ll take the night shift/And I’ll never see you again if I can help it/In five years I hope the songs feel like covers/Dedicated to new lovers” the sweeping, gorgeous “Body to Flame” and pop bite of “Next of Kin” – “I am at peace with my death/I can go back to bed”. It’s a career defining collection that’s worthier than the words written here, or like she says on “Addictions” – “invest your time in what’s worthwhile”.

How preposterous is it a group like Low, in their 25th year, makes the best album of their career? Double Negative sounds like a Low record, in the sense you hear the vocals of Alan Sparhawk and Mimi Rogers, but everything else sounds…different. At times Double Negative feels like a hymn. Other times it sounds like the instrumentation is disintegrating between your ears. Then it just sounds like the death of sound. It’s a masterwork that deserves and should be digested at once. Occasionally while, there are special albums sound like they’re living organisms. None have ever sounded like they’re coming to terms with the end of their existence. Until now.

4. Fucked Up – Dose Your Dreams

For a group already known for their ambitious 2011 rock opera David Comes to Life, the thought they would top it with another double album seems patently insane, but they actually *did it*. It’s an overwhelming assortment of punk, psych, digital hardcore with elements of arena rock and other genre experiences. That said, it represents everything great about them to this point and pushing them in completely new directions for the future. It’s an album elevating a ‘great band’ to an ‘all-time great band’. Vocalist Damian Abraham has taken a less active presence in the group, being deployed a little more carefully across 13 of the album’s 18 songs – and it works beautifully.

Whether it’s the catchy-as hell glam rock stomp of “Normal People,” the disco-psych of the title track, and the gutbucket hardcore of “Living in a Simulation,” the throbbing snyth pummel of “Mechanical Bull” or guitarist Ben Cook’s shredded lead vocal on “Accelerate”, there’s a staggering amount to get into.

Dose Your Dreams is the sound of six people with disparate influences pushing outside what it means to *be* a band. No longer confined to traditional roles – there’s no longer one singer, one guitarist, one drummer, so on and so forth – they have made a record that’s messy, fearless and totally original, so much so that it needs to be heard to be totally understood. If it’s the last record the group makes then holy shit, they went for broke and nailed it.

5. John Prine – The Tree of Forgiveness

John Prine’s first album of new material in 13 years is a great place to start with the legend’s career, as it kind of covers the ground of the sometimes funny, sometimes terribly sad songs he’s known for. Working with Dave Cobb (known for producing both Jason Isbell and Chris Stapleton) Prine focuses on the mundanities of everyday life, and some of those songs like the humorous “Egg & Daughter Nite, Lincoln Nebraska, 1967 (Crazy Bone)” and the tender “I Have Met My Love Today” is a gorgeous little love song that comes and goes in under two minutes. “Summer’s End” is probably one of the most beautiful, weightless ballads I’ve heard in a long time. It’s a record that’s a small gift, one that you’re welcome to have but did not at all expect. That’s the best kind.

On Restorations first album in four years, the group delivers an emotional wallop over seven songs in a 25-minute span. It’s a look into being in your thirties – appreciating all the things that the age brings – love, stability and the prospect of a bright future still ahead, but sometimes just falling short.

“The Red Door,” LP5000’s best song, addresses the process of gentrification. “Feel my pulse pick up with/every building that’s built/haven’t we all felt a little/a little in between before?”, Loudon says. Sure, he could be talking about the band’s hometown of Philadelphia, but it also doubles of the transitional point of your life of moving from one constant to something totally unfamiliar, with one of your favorite places being wiped away without a trace in favor of something hollow and empty, or worse, replaced with nothing at all.

It is a complicated record that has remarkable highs and lows in such a short amount of time. Restorations have always been a band that crushes with dynamic sonic shifts paired with bone-cutting truths. They’re a band trying to live the best they can and admitting it’s fucking hard. We’re people less about where we’re from and more about how we relate to each other through our experiences. In the unbearable nowness of now, it’s the best we can do. It’s good that records like LP5000 exist to remind us of that.

Let’s get it out of the way: Believe the hype. All of Kacey Musgraves’s records are the real deal – slices of contemporary country that don’t sound like shit and hint at something greater and more progressive. Hint no more. Golden Hour is Musgraves best and most fully realized record, one that transcends country, or any genre really, with the focus on crystalline songwriting, and gorgeous arrangements. It’s the career-defining achievement of an artist who still might have not peaked yet. That’s inspiring. Just don’t waste any more time not listening to it.

It’s hard to classify exactly what genre the Edinburgh, Scotland-based group are, because they encompass so many different ones at once. It’s a little hip-hop, it’s a little indie rock, and then there’s some weird touches of R&B. They won the Mercury Prize in 2014 for their debut album Dead and were featured prominently on last year’s Trainspotting 2 soundtrack. Their latest, Cocoa Sugar is a breathtaking, densely layered collection melding Gospel choirs, skitter-stop raps and Radiohead-inspired sound beds.

I keep coming back to it time and time again because I’m always hearing something a little different each time. There’s not really any sort of comparison I can make for it from anywhere. Listen to “In My View” for some burnout balladry, the buzzing aria of “Lord” or the narcotic daze of “Wow”. It all changes from song to song and it couldn’t come from anywhere else. Like all great records, it rewards with multiple listens. It’s an excellent record which positions them on the cusp of greatness. They’re building a hell of a case for it.

This is not a knock on Janelle Monae’s past records, but Dirty Computer blows them out of the water. While she’s always been ahead of the vanguard with her high concept records, sound and style, she’s never sounded as loose and comfortable within her own sound than she does here. Melding R&B, hip hop and pop, she’s doing it in a way few have attempted. There are Brian Wilson and Pharrell guest spots. Stevie Wonder shows up. The guitar heavy “So Afraid” will stop you in your tracks. Plus, those synths sound positively freaky, none more than “Make Me Feel”, which may or may not have had some assistance from the dearly departed Purple One.

Jeff Rosenstock seems to be advancing as an artist at hyper-speed, creating higher concept, epics-in-minutes style punk. 2016’s Worry was a landmark record in terms of Rosenstock’s ability to stitch together his euphoric, nervy style. POST-, however, feels like the other side of the coin. Surprise-released on New Year’s Day, Rosenstock has made a record that’s emblematic of the year that followed. Frantic, pissed and often ebullient, he’s doing his best work of his career now, and this record feels like another effortless classic.